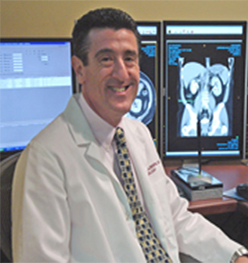 Do You Have Concerns?

Ask Me Your
Prostate Imaging Question

Current screening methods are diagnosing cancer earlier than ever before. The mortality from prostate cancer has declined over the last two decades, in large part relating to these screening methods. However, it has come at a cost of over-diagnosis and overtreatment of cancers.

Many of these low grade or indolent cancers are stable or so slow growing that they would otherwise cause no symptoms or death during a man’s lifetime. Current prostate cancer treatments often result in long-term quality-of-life effects on sexual, bladder, and bowel function.

It is estimated that 40-50% of men diagnosed with prostate cancer today have “favorable risk” cancer. This is defined as low grade Gleason 6 score or less cancer and PSA values of less than 10. These men may be candidates for active surveillance (AS) or careful observation as it is sometimes referred to.

There is a subset of approximately 30% of men who are initially diagnosed with favorable risk cancer but actually harbor higher grade aggressive cancer. These patients will often fail an AS program and may eventually require definitive treatment. This happens because our current method of diagnosing prostate cancer, Systematic TRUS Biopsy is essentially blind and randomly samples the prostate. This results in under sampling and under grading of disease. It is actually worse in larger prostate glands. Many physicians and patients are reluctant to implement an AS program and delay or miss the chance for definitive treatment without knowing whether they may or may not harbor a more aggressive cancer than what was biopsied.

This image of a prostate was from a patient that underwent a TRUS (blind) biposy procedure. The results from the biopsy were negative, however, when the patient then had a 3T MRI of the prostate, a highgrade anterior transitional zone cancer was seen.

With the advent of newer 3 Tesla (3T) MRI scanners, improved sequences, and better image processing of the type at Partners Imaging Center, numerous studies have confirmed the important role of MRI in cancer detection and selecting patients for active surveillance.

Many of these are “hidden” cancers located in the anterior portions and transitional zones of the prostate that are often missed by routine systematic TRUS biopsy. These can then be “targeted” for biopsy by using techniques such as 3D MRI/TRUS Fusion Biopsy. By using this “targeted” biopsy approach, clinically significant cancers can be diagnosed and the decision for treatment instead of AS can be made earlier.

For men considering Active Surveillance, a 3T Multiparametric MRI of the prostate is recommended.